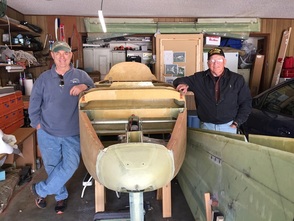 Vance Atkinson and Ben Bennett visiting my Project: March 2016
I never planned to build my Cozy in a vacuum and working all alone.  I monitored the builders group online for several months before deciding that I shared common interest with them and they cared about each other's growth.  When I realized that I really wanted to get to know these people I knew I'd picked the right project.  I also visited a couple of builders in my extended area (including Houston, and San Antonio) to convince myself further that this wasn't something I'd be sorry I started later.  In this section, I'd like to recognize significant face-to-face interactions with other Cozy builders/flyers, paying some tribute to the help they've provided me, over and above email exchange.

​Visitors to My Project:

Of course the local Cozy builders (Ben Bennett, Nelson Amen, and Les Behrens) have visited a number of times since we have shared the turtleback jig, and Ben and I see each other about once a month to let each other know what we're doing and what we're learning, and loan each other stuff as needed.

My first visit by a builder/flyer was 3/20/16 from Vance Atkinson, who flew down from FTW to inspect progress Ben and I were making.  We met him at Austin Executive and he shared lots of insights from his long experience with canards and pointed out specific areas for us to consider.  Vance has built a Long EZ and a Cozy III and accumulated thousands of hours in both to compliment his professional flying career.  More importantly, Vance developed many improvements the Cozy over the years and has extensive experience test flying these adjustments, and providing building and flying guidance to our community.  In my case, we talked about fuel system architecture, electronics and switching, turtleback latching, and cockpit heating.  He took a look at my wings/ailerons, winglets, canard, spar, and fuselage.  He didn't have any recommended "do this over's" but we did discuss that I've glassed in rear arm rests early, and I could be cutting some of that when it's time to route fuel lines...  Of course it was a valuable experience for me and I look forward to having other builders visit if convenient for them.

On 7/16/16 Michael Garmon was visiting Austin from Houston and he and his wife (building partner) and son (who's done layups too) came by to see my project and meet the Austin area Cozy builders.  Ben and Les came by too.  Michael had just recently finished Ch 21 strakes on his MK IV and I'm just about to start them, so this was perfect timing.  Ben was also about to head to OSH, so lots of stories to share.  Thanks Mike for stopping by and sending me your notes from Ch 21!  I'll try to get down to Michael's place before I get a first hand view of things we talked about. ​  Darn it, I forgot to take a picture with everyone here... 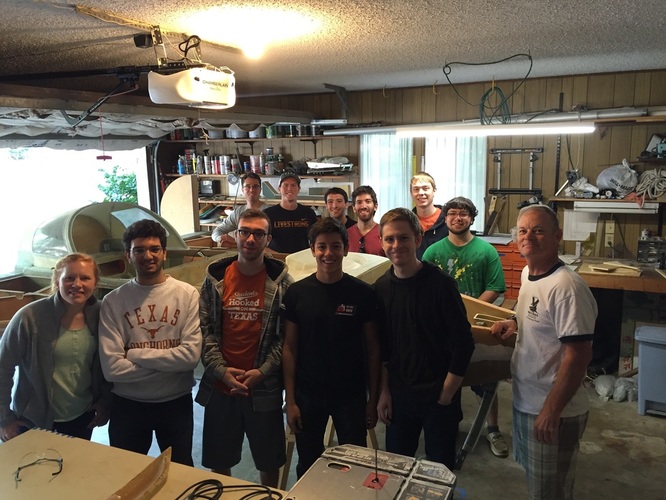 My first student group visit occurred on 11/13/16 when the University of Texas at Austin, Student Chapter of American Society of Mechanical Engineers arranged to come visit. We talked through the fundamentals of composite construction with foam and glass and I showed samples of various kinds of foam and glass fabrics we use on the Cozy. There were lots of questions on design philosophy, and factors of safety, that reflected their interest in translating what they are learning to what they were seeing. Of course, most wanted to sit in it, as well. They were curious about the engines we use and were impressed with role of the online builders group in supporting the plans as Nat had prepared them. It was great fun hosting them and we'll see if other groups gain interest over time.
First Flights in Other's Cozy's

My first flights came in May 2018 in Longmont CO while visiting the area for vacation.  I'd met Rick Hall, Curt Boyle, and Bill Kastenholz at KLMO and they spent time with me talking and looking at Rick's and Bill's Cozy's.  Curt also spent a good bit of time with Rick and I over lunch talking about the canard simulator characteristics he'd built and other best practices he's been using in his Cozy restoration.  Rick then got me up for my first flight with him and it was amazing.  I really had very little to compare with it, based on my under 100 hrs in a Cessna 152/172!  So much faster and so easy to bank and turn.  I knew from sitting in cockpits in hangars that the view was going to be exceptional, and it was so beautiful to get in the air and experience it.  We flew for about 25 minutes with me getting a little stick time to feel the canard but it felt like a blur.  I really  appreciated seeing how Rick used the Dynon HDX display, since that's what I'm installing too.  Bill gave me a 2nd flight a few days later and we focused on feeling stalls, steeper turns, and talking through some of the same things Rick had shown me, but I'd been too consumed to remember.  We did a touch and go and then landed to allow basic landing sight pictures to develop and set the stage for further practice both in the simulator and live when I'm getting close to done on the build.  I really appreciate what these super friendly builder/pilots did to both enhance my build and provide a tremendous motivating push to my project and personal development.  Rick gave me some stick time again when I visited late Spring 2019 after I'd been flying Cessna's extensively and it was a great new experience working in the pattern with a much faster bird and setting up the lower/flatter/faster approach.  Rick did the takeoffs and landings themselves but gave me lots of hand's-on time other than in the close to ground conditions.  I also had the mental bandwidth to begin appreciating the Dynon HDX display that we both have.
Proudly powered by Weebly