I got some great feedback from the Cozy Builders/Canard Fliers lists on making custom cowlings before starting on this.  There have been some amazingly innovative approaches to the challenge of building a custom cowling.  I chose to build custom for the following reasons:
1. Want the cowling to match the UL engine, which is a little smaller, and mounted slightly more aft than the Lycoming 360.
2. Want as clean an inflow to the UL prop as possible.
3. Want to run my exhaust directly out the bottom of the cowling as demonstrated by Nate Mullins. This is facilitated when the cowling is shaped for this approach.

​I started with the lower cowling since I need to figure out it's shape to determine where to trim/adjust the exhaust pipes to exit the cowling adequately.  This little chain of dependency resulted in shift of focus as I was intent previously on getting everything done to get to first start of the engine, and shaking out any electrical, fuel, oil, etc issues prior to moving to hangar.  That's just the way it is when you take on something new.  You have to adapt to the need, and at the moment, I don't want to start the engine until I've got the exhaust system reasonably well set.
I did not want to turn the plane over at this point to build the cowling in place, and I could not figure out a way to build it without having gravity assist.  I decided to build my cowling inside a standard featherlight cowling and use foam to fill the gaps between the standard cowling and what I wanted for the UL engine.  Note: this is no small undertaking.  I'll go through what I did, but it's not a quick process.  Essentially, I'm building a one-time use mold inside the featherlight.  Nelson Amen was gracious enough to let me borrow his featherlight cowlings for this process, as he's still a ways from using them.  Here are the steps I went through, and a few pictures from the process: If I had to do this again:
Photos: Ugly up front building the form inside the Featherlight Cowling:
Photos: Layup and fitting of the result: 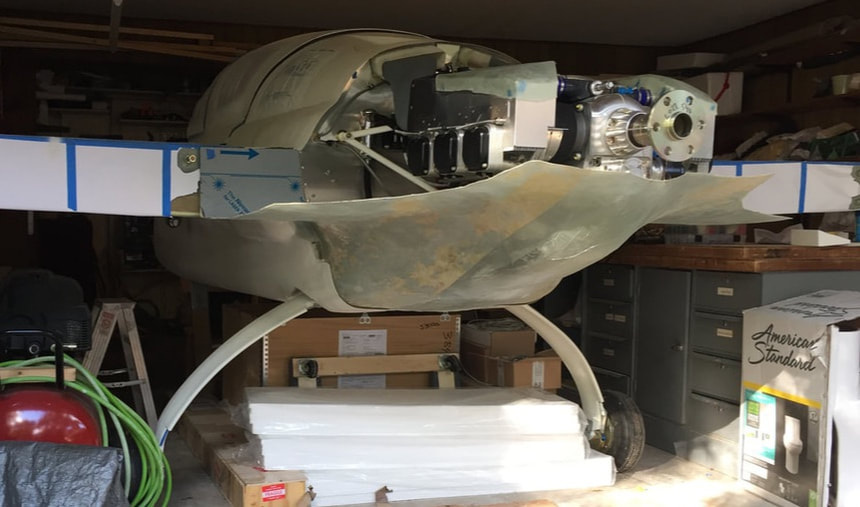 A view of the lower cowling in the initial fit-up

The upper cowling shape was a completely new design because I wanted to keep the aft aperture small, fit the UL engine (which is mounted further aft than the Lycoming since it's lighter to meet the CG needs), and match the firewall/strake/wing root.  I consulted Ryley Karl and Nate Mullins on how to set up foam in the engine area and ultimately used the method below, which borrowed most heavily from what I saw Nate doing with 1/2" pink foam from local home improvement store.  In this case I'll annotate the figures more for description.  I also show a visual comparison of the featherlight cowls to my custom cowls.
With BOTH cowlings mostly completed and interfaced with TORX screws to the firewall and strake lips, and each other in the back area, additional reinforcement was applied in the attachment edges and beefed up with 3 more BID.
Proudly powered by Weebly